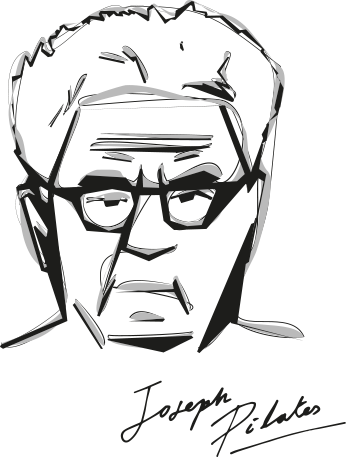 Pilates is an exercise system created by Joseph Hubertus Pilates at the beginning of the 20th century. It is based upon a series of exercises designed to elongate, strengthen the body and control the movement. This is the reason why its creator initially called the method CONTROLOGY. Nowadays, it is commonly known as PILATES, after the surname of the creator.

Specific equipment is used to practise Pilates – also designed and developed by Joseph Pilates – such as Reformer, Cadillac, Barrels, Mat and so on. 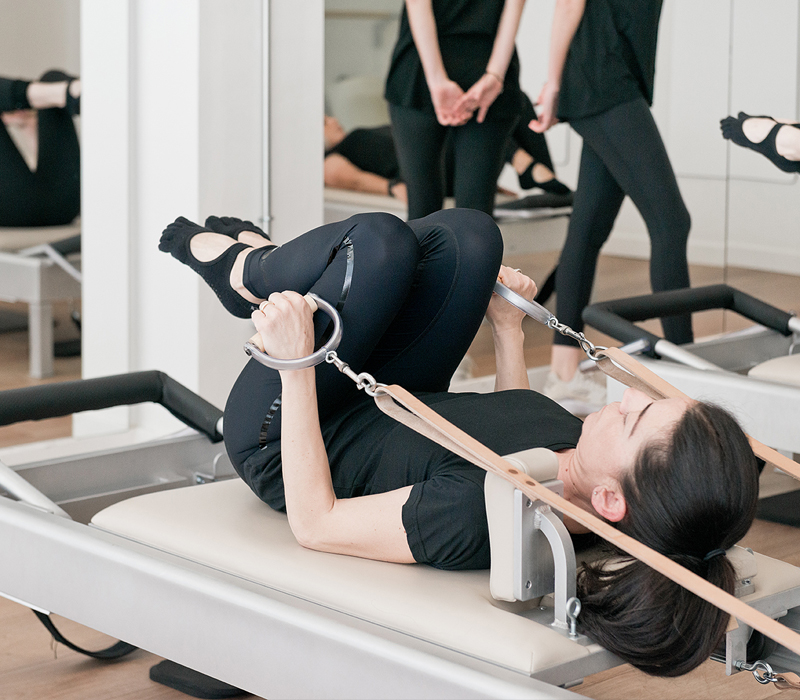 “Pilates improves the quality of life”

the body in a comprehensive and balanced way
2

of the body and the movement
4

Develops and boosts concentration and attention

of the spine and of the body in general

THE ORIGIN OF PILATES

Joseph published two books; in “A Corrective System of Exercising that Revolutionizes the Entire Field of Physical Education” in 1934, and “Return to Life through Contrology” in 1945.

He gained popularity and enjoyed recognition in the course of his life afterwards. Joseph died in 1967 at the age of 83. Clara continued his legacy well into her last years (she died 10 years later) being helped by Romana Kryzanowska, Joseph’s preferred disciple who would firmly safeguard and promote his methods.

In his Manhattan studio, he trained people with different social, racial and age backgrounds independently of their sex or physical condition. This, in fact, was something surprising and ahead of his time. That’s why it is called a UNIVERSAL method. Real success came when in the 30’s popular ballerinas started attending his gym, after which society people followed.

After 10 years in Germany and several trips to the USA, he decided to move to New York.  On the ship to the States, he met his future wife Clara, who was a teacher. She stayed with him to his death and was his assistant in operating, promoting and safeguarding his training system.

In 1927, with the help of his wife, Pilates, aged 44, founded a studio in Manhattan (939  Eighth Avenue with 56th Str., known worldwide as a first-class boxing area). He named the studio PILATES where they taught CONTROLOGY. The concept was totally innovative and distinctive for the time because it trained body and mind at the same time.

After World War I

After World War I, he returned to Germany where he presented himself as a healer and a gymnastics teacher. On the other hand, as a semi-professional boxer, he opened a boxing school in Germany. However, he was banned for life from boxing due to his disobedience. In that period, he taught police officers self-defence in Hamburg, did rehabilitation for the veterans of war, and patented his first Pilates equipment, the ‘Footcorrector’.

After the death of his first wife, he moved to England in 1914, where, as recent studies show, he worked as a circus-performer, and a self-defence trainer. He was later interned by the British government and sent to a concentration camp. In that period, he began to intensively develop his concept of an integrated, comprehensive system of physical exercise compatible with the limited space he had at that moment.

Joseph H. Pilates was born to a humble family on December 9, 1883, near Dusseldorf. His father was a metal worker, and his mother was a housewife.

Pilates was a sickly, weak child, a condition that aroused an enormous curiosity in him to study the human body and the benefits of physical exercise. He spent hours studying the movements of animals, as well as other physical disciplines, all of which gave him the idea that through exercise he was able to heal and strengthen his body.

After intensive work, he developed his own system of physical training which he initially called CONTROLOGY, as it was based on the mind controlling the body. This is the original name of the method popularly known as Pilates, called after its creator.

Joseph Pilates was undoubtedly a genius of physical education who developed a completely new training system, besides designing and creating his own equipment. Thanks to Romana Kryzanowska’s efforts who devotedly kept and operated this method, we now have an established school where we can study this discipline.

Find out more or adjust your settings.

This website uses cookies so that we can provide you with the best user experience possible. Cookie information is stored in your browser and performs functions such as recognising you when you return to our website and helping our team to understand which sections of the website you find most interesting and useful.

Strictly Necessary Cookie should be enabled at all times so that we can save your preferences for cookie settings.

If you disable this cookie, we will not be able to save your preferences. This means that every time you visit this website you will need to enable or disable cookies again.